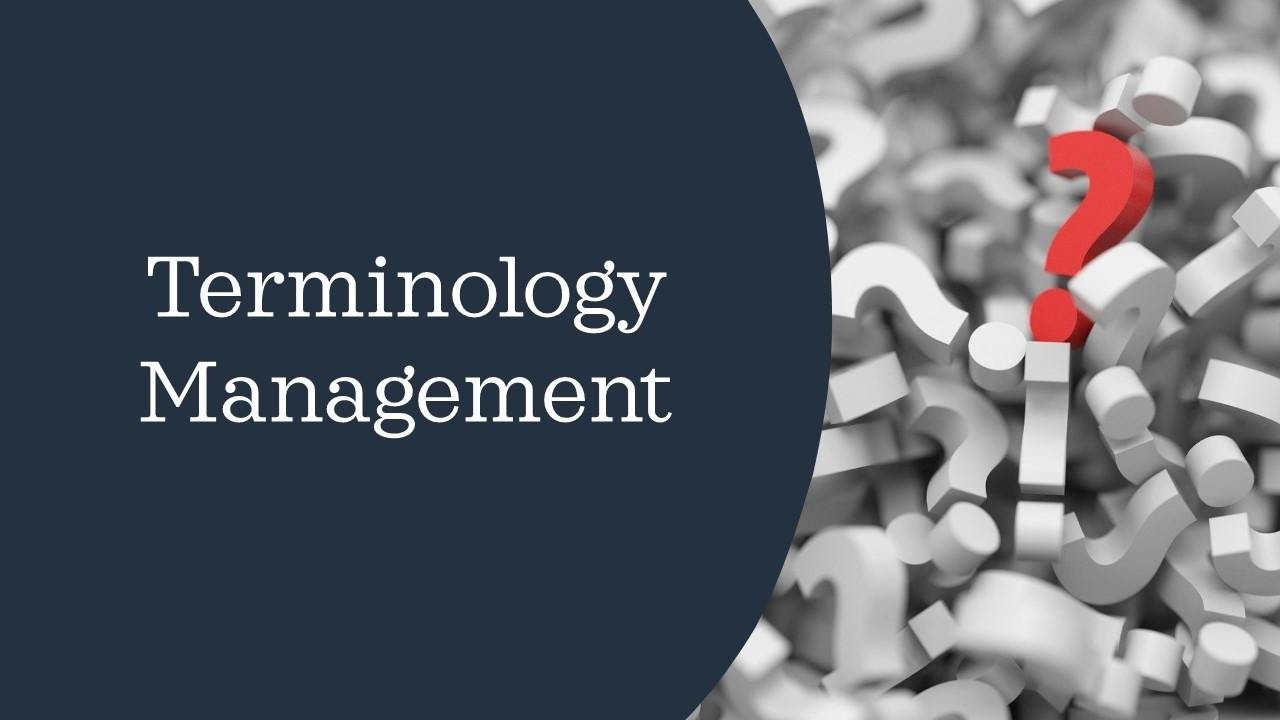 October 7, 2020 By Olena Polissky Comments are Off

What exactly is terminology management?

To understand the importance of terminology tools, let’s turn back the clock a few decades, before personal computers became a vital part of the translation industry.

Imagine that you have a document you need to translate from German into English—a 60-page operating manual, for example.

You fax (or mail) the manual to a translation agency. In turn, they send it on to a translator, along with any additional resources you might provide, such as a hard-copy glossary.

As the translator works, all terminology checking needs to be done manually. Even if provided with a glossary, the translator has to go through the source text with a highlighter in hand, looking for instances of each glossary term.

Likewise, you may have been happy with the translation done on the previous edition of the manual, two years prior. But even if you provide source and target copies of that manual, the translator still has to cross-reference them repeatedly in order to take advantage of previous translations.

When it comes time for revision, the reviser has to follow the same series of labour-intensive steps to ensure that the right terms were used. If they are working with a glossary of, say, 200 terms, that could mean hours spent confirming that the right words were used.

Computer-Aided Translation tools (within the industry, you will often hear them referred to as CAT tools) were created in the 1980s to address these issues. In the thirty-plus years they have been available, they have evolved to automate many of these processes.

Within their CAT tool, translators typically work with some combination of a translation memory, a glossary, and a style guide. Each of the three plays an important role in managing terminology across translation projects.

Statistics show the value of a well-organized terminology strategy: a 2016 survey by SDL found that inconsistencies in terminology were the number one reason that translations needed to be redone.

And when General Motors studied translation quality within their company, they found that a staggering 47% of translation errors were due simply to the wrong term having been used.

Today, savvy companies rely on a full stack of interdependent tools to avoid terminology errors, save time, and translate their content seamlessly.

We are first going to explore the three main tools translators use to manage terminology, and then we are going to look at what benefits they yield for translation buyers.

What terminology management tools do translators use?

A CAT tool typically breaks a document down into “segments,” or units of translation. A segment might be a sentence, a bullet point, or even a one-word headline.

A Translation Memory is a database that consists of source-language segments, paired with their target-language equivalents. Additional metadata may be stored with each segment pair, such as the date it was translated or the name of the source document.

For translation purposes, a Glossary consists of a list of source words or phrases and their equivalent(s) in the target language. Other information may also be included with each term, such as product images, links to relevant websites, or definitions.

It is tempting to see glossaries as synonymous with dictionaries, but that is not the case. Unlike a dictionary, which contains all possible definitions of a term, glossaries are written for a specific field or even an individual client or brand. A glossary may also specify words or phrases that should not be translated, such as trademarked words or phrases, organization names, or even colour names that need to match what is on the packaging.

Importing a glossary into a CAT tool automates some elements of checking terms will be underlined, translators can insert the right term with a keystroke, and quality control checks will flag segments where the correct term has not been used.

Should the word tweet be capitalized or not? When discussing a book, should its title be italicized, enclosed in quotation marks, or underlined? What dictionary should be used as an authority on spelling questions?

A style guide sets out to answer questions like these about usage, formatting, punctuation and more.

Some projects will rely on established style guides, such as the Associated Press for journalistic articles, or the American Psychological Association for academic works. In other cases, individual companies may have developed their own internal style guide. 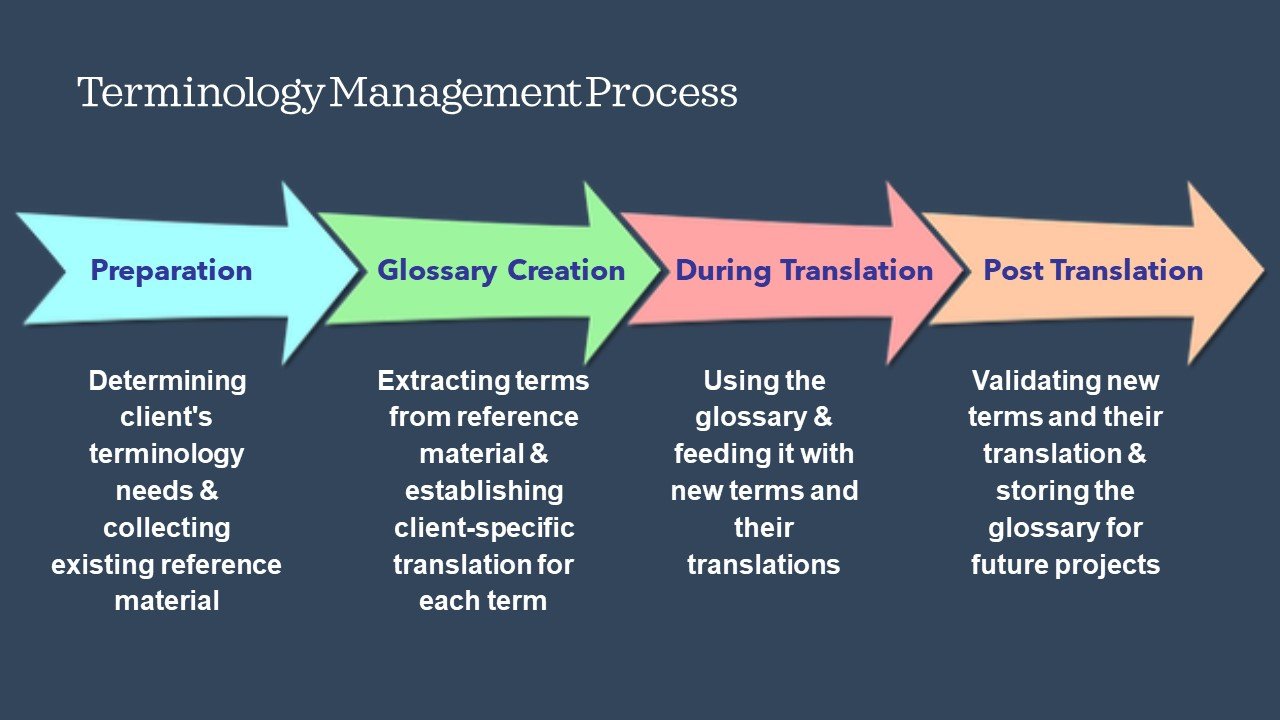 Why Use Terminology Management Tools?

Many large-scale projects—such as software help files, eLearning courses, or websites with large product catalogues—require a team of multiple translators and editors in order to keep timelines manageable.

Terminology management tools allow translators to work as a cohesive team, no matter where in the world they might be located.

Each translator will have access to the same glossary and style guide. When they share a translation memory, they will also be able to see how their colleagues have handled a similar phrase and incorporate it into their own work.

As you undertake more and more translation projects, you will refine your preferences. Your translators will learn from your feedback and incorporate what they have learned into their translations moving forward.

Maintain Control Over Your Brand

Chances are that your company has developed an exhaustive brand guide for its design and content creation teams, dictating both the look and feel of the brand (such as the colour palette) and its tone and voice.

Creating a style guide and a glossary allows you to exercise this same level of control over your translated content, specifying your preferences at a granular level.

If you have in-house reviewers who will be working closely with the translation team, they can be involved at multiple steps of the terminology management process, from drafting and approving a glossary to providing feedback on specific translations.

One of the pillars of any business case for a robust terminology management stack is error reduction.

By crafting a thorough glossary and style guide, using the terminology checkers built into a CAT tool, and working off a robust translation memory, a translation team can decrease the likelihood of costly errors.

Once an error is discovered, costs can pile up quickly: marketing collateral that needs to be reprinted, packaging that necessitates a recall, or even time spent issuing formal statements (or making social media posts) to address fallout from an error that went viral, as Coca-Cola had to do in New Zealand when they mixed English and Māori in an attempt to craft a catchy slogan.

In some extreme cases, translation errors have even caused stock prices to drop. In 2012, Sharp released its quarterly earnings report in Japanese. When it was translated to English, the text misused a precise term that suggested that investors should be concerned about Sharp’s status as a going concern, although the source text didn’t indicate that same level of concern. While the error was ultimately corrected, the initial concern caused a 10% dip in the stock price.

Research has repeatedly shown that it is more expensive to fix a translation error after the fact. For example, J.D. Edwards calculated that it cost $150 to manage a term within its system, but the cost of changing one once it had been deployed was $2000.

Simply put, investing in a glossary, style guide, and translation memory is the easiest way to prevent costly errors down the road. When efficient terminology management is paired with advanced CAT tools, it also allows us to offer further discounts for repetitions, decreasing cost as you continue to work with us.

Any translator can tell you that with a well-managed translation memory, glossary, and style guide in their toolbox, they are able to work much more efficiently.

For one thing, many corporations reuse text from one document to another, such as the description of a company at the end of each of their press releases. When existing translations are available in the translation memory, a translator does not have to start from scratch. If there is not an exact match, their CAT tool will look for similar segments that the translator can re-purpose after editing.

When both translators and revisers have access to one or more of these tools, projects can be turned around more quickly, while still ensuring that the translation is both accurate and a pleasure to read. Additionally, the right terminology management plan can yield discounted rates for repetitive texts.

Contact us to set up a call to discuss how Art One’s terminology management strategies can help deliver high-quality translations that meet all your company’s requirements.