At Art One Translations, we produce more Spanish translations than almost any other language. Spanish is spoken by more than 543 million people worldwide. As the official language of 22 countries, it has many different dialects.

Latin American Spanish and peninsular Spanish are mutually intelligible. However, they have enough differences that Spanish translations into the wrong dialect will sound awkward to native speakers.

Beyond regional differences in pronunciation, the two dialects also vary in terms of vocabulary, grammar, and usage. Spanish translations need to consider all these elements.

The Role of Vocabulary in Spanish Translations

A major difference between European and Latin American Spanish is vocabulary. The word almacén, for example, means “warehouse or department store” in peninsular Spanish and “grocery store” in Andean Spanish (a dialect spoken in the central Andes, in western Venezuela and southern Colombia).

The most common Spanish word for truck, camión, means “bus” in Mexico; cuadra, which means “stable, pigsty” in peninsular Spanish, means “city block” in Latin America. In Latin America, a computer is called la computadora, while in Spain, it is called el ordenador.

While these differences may seem minor, many words are inoffensive in one region but have a vulgar meaning in another. This can also happen within Latin America; the region is so large that Argentinians and Mexicans use the same words in vastly different ways.

Ensuring that in-country experts perform your Spanish translations is the best way to avoid errors or potential offences.

Not only do everyday vocabulary and slang differ between countries, but so does technical vocabulary. Your technical Spanish translations need to be handled by subject matter experts in the target country who know exactly which words to use.

Grammar and Usage in Spanish Translations

When asking “What happened?” about an event that just occurred, speakers in Latin America would use the simple past verb tense, “¿Qué pasó?”, while speakers in Spain use the compound past tense, “¿Qué ha pasado?”

The former phrase would sound odd in Madrid, while the latter would sound bookish in Mexico City. Subtle nuances such as these could ruin the tone of a Spanish translation if it happens over and over.

Even the plural forms of the pronoun “you” differ among the dialects, and Spanish translations must be adapted accordingly. For example, an advertisement addressing the client in Costa Rica might use vos, but in Mexico, the same ad would use tú. Using the wrong pronoun can make what was supposed to be a playful advertisement sound stiff or completely foreign. 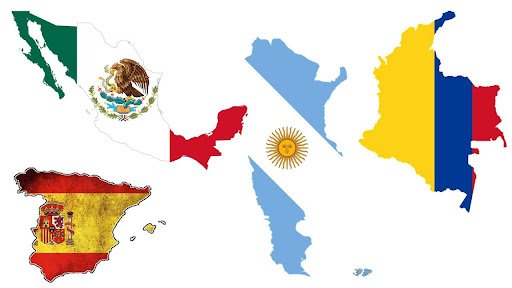 Although these individual differences may not seem like much, they significantly affect the quality of Spanish translations.

Your goal as a business is to get potential customers to ‘know, like, and trust’ you. Accurate Spanish translations that use local vocabulary and cultural references make them feel valued and understood, increasing trust. On the other hand, inaccurate and confusing Spanish translations can make potential clients skeptical, even if your product or service is excellent.

While it can be tempting to cut corners by attempting a “universal” Spanish translation, the reality is that it can leave potential customers feeling as if they are not valued. To build a business case, consider the size of each Spanish-speaking market, as well:

In context, it is easy to see that these are significant markets with immense potential.

For example, a swimming pool is known in many countries as a piscina. However, in Mexico, it is called an alberca, and in Argentina, they use the word pileta. A Mexican or Argentinean user will likely understand the word piscina. But if they are searching for something related to pools, they will use the first term that comes to mind—the local one.

At Art One Translations, we tailor our Spanish translations to the specific region in which they will be used. Every translation we produce is written and proofread by linguists living in the target region, so we create error-free texts that read as naturally as an original document.

We also provide localization for software, website, user manuals, and other types of files and employ specialists in many fields so that any text can be tailored for your needs and adapted for a specific market.

Don’t hesitate to contact us to learn more about our Spanish translations and how we can help you with your project.

Learn more about translating your technical document to Spanish and how reaching a Spanish—speaking market can impact your business.